Whitetail Run Bobtails, in the early days, was a small family cattery located in a rural part of Loudoun County, Virginia. There were cats of all ages running around the house at any given time, and woe to the hapless field mouse who strayed into their midst! Raising so many cats is almost like raising children, because they are always underfoot and love to play! These "children" all 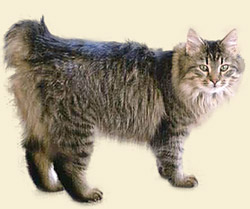 have that loveable bobtail personality, though each one is also unique and occupies a special place in our family.

The cattery was born quite by accident after we lost our beloved "Poo", a precocious British Torbie who wandered into our lives one day and stayed for thirteen years! Poo's void was unbearable after a few months, so we bought two little American Bobtail kittens to liven up the house. "Attila" and "Hannibal" captured our hearts immediately with their playful, affectionate natures, and it wasn't long before they sparked Carlas's interest in breeding.

She managed to acquire "Jill", a mature classic female American Bobtail, and picked Attila for her mate. We were surprised and delighted with their seven perfect sons, two of whom, "Dante" and "Symeon", won 24 ribbons on their first appearance at a cat show! There would be many more.

Pixie-bobs joined the household a short time later, and joyfully had the same personalities as the American Bobtails. Beginning with a litter from "Myst", they also proved to be very successful in competition.

Since its meager beginning, Carlas's breeding program produced grand champions in both breeds. Years, and hundreds of show-ring ribbons later, Carlas became one of the most respected American Bobtail breeders in the country. She led the effort to establish an American Bobtail breed standard, and in 2002, the American Bobtail was officially accepted for championship competition by The International Cat Association (TICA).

By this time our "labor of love" was becoming all-consuming of spare time and money, so it was necessary to curtail the breeding program in order to spend time with the non-feline members of the family -- namely the grandchildren! Consequently, we are no longer breeding bobtails. In fact, we moved to the Texas countryside with all the kitties and installed them in a building with inside and outside access to give them some freedom.
That move was over ten years ago and all but two of the old bobtail cats are gone now. However, I do enjoy looking back at some of the old photos, so I will maintain this website as long as practical. Enjoy.